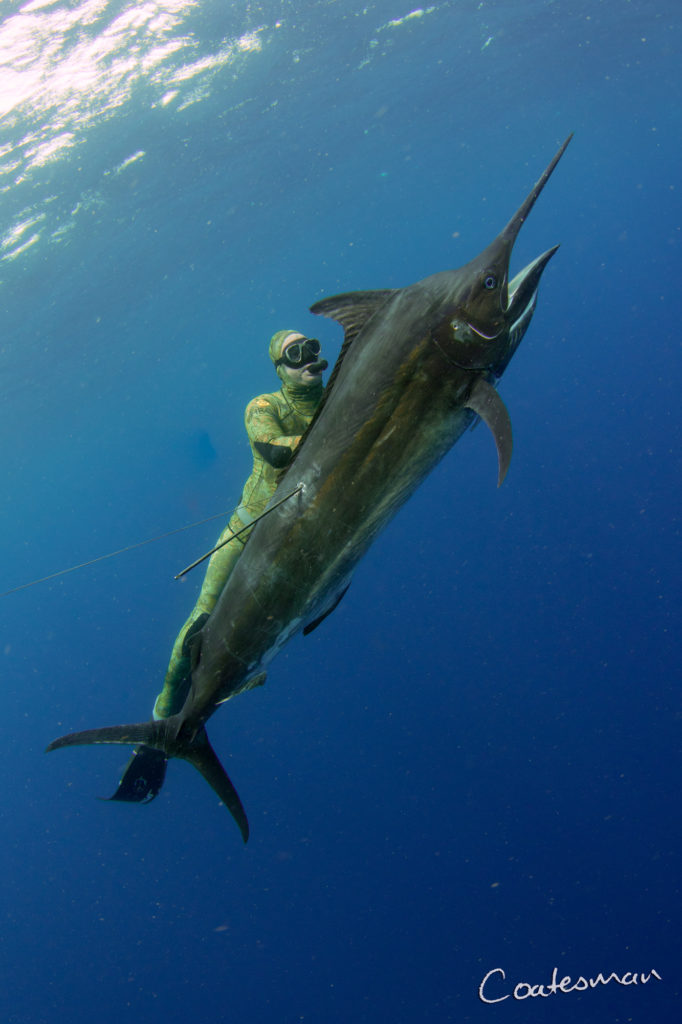 Mozambique has to be one of the most fantastic tropical spearfishing destinations in the world. Warm water and an abundance of fish make this the place of dreams for many spearfisherman around the world.

Mozambique is on east coast of Africa and has a vast and ruggedly beautiful coastline that is home to some of the best fishing in the world. Starting with Santa Maria in the southern end of the coastline to the deep reefs further north. These dive sites range from extreme blue water locations famous for the giant Black Marlin to remote reefs holding trophy reef species and other great gamefish.

The capital of Mozambique, Maputo receives most international flights. The trips are based an hours boat ride away, with accommodation ranging from 5 star private lodges to more rustic chalets on the waters edge. So there will be something to suit your budget and needs.

Due to the nature of the type of diving here I prefer not to take large groups and provide a more personal hands on experience for each of my clients. This means that I accompany each dive and will be in the water at all times with you. There is much to learn about getting good fish in this area and I will share these secrets to ensure you get the fish you are after. 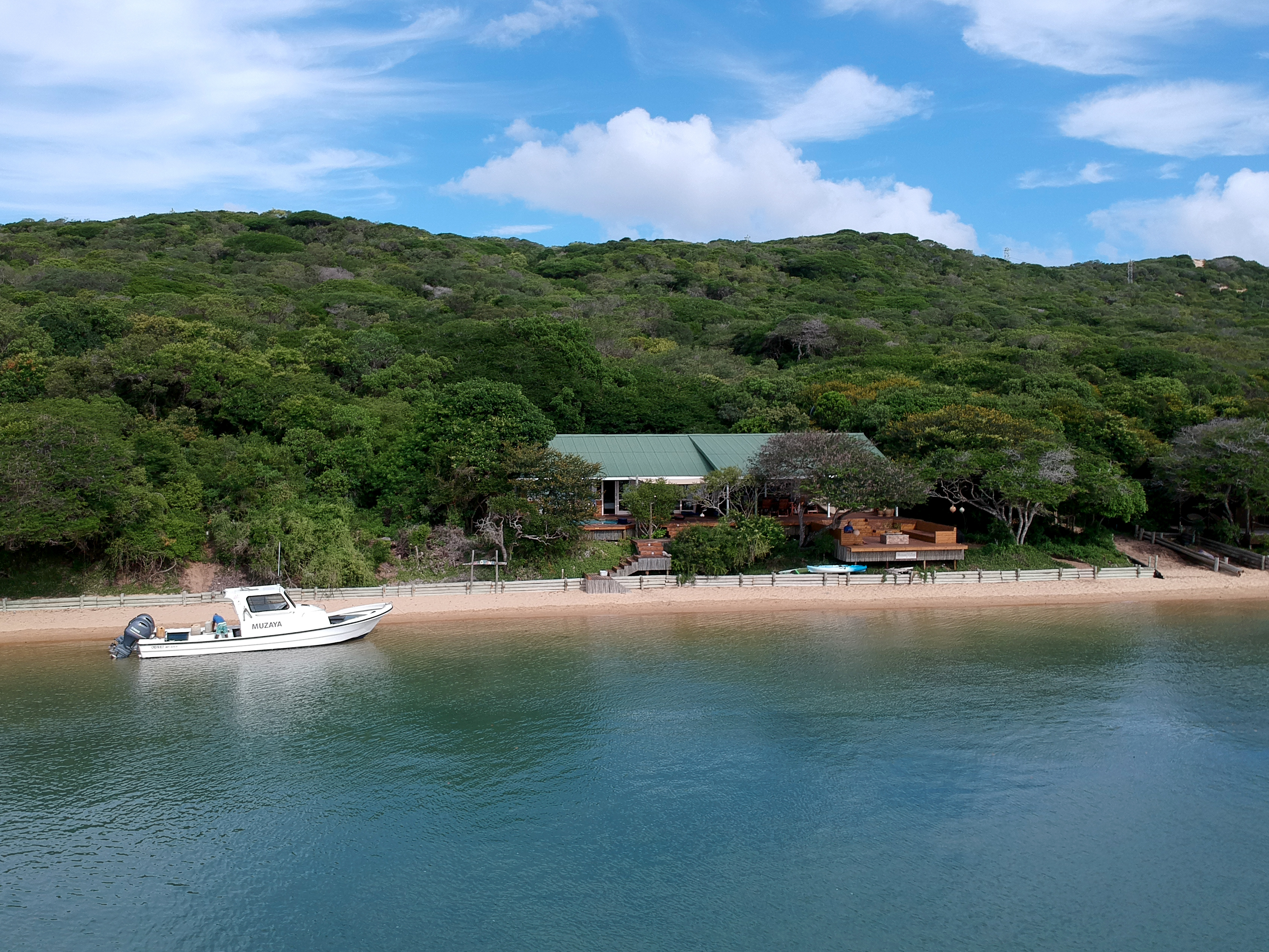 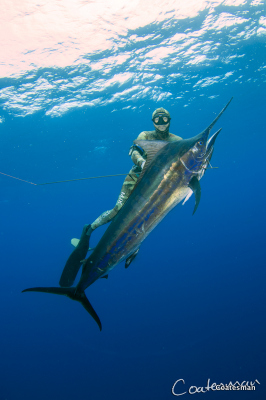 January / February
Calm seas and can have very good weather for 10 consecutive days. The water can also be very clean on the shallow reefs, which is good for bottom fishing. Lots of small tunas bring in the game fish. Spanish Mackerel, Dorado ,Wahoo , with both Sailfish and Marlin around. This is a great time of the year.

March
Expect calm seas sometimes with occasional tropical storms that can last 3 or 4 days. This is why I recommend 10 days so that if there is a down day or two, you still get lots of dive time. This is prime time for GT kingfish in shallow water and the Green Job Fish. The Spanish Mackerel and GT’s abundant, along with some big Wahoo, Sailfish, and Marlin on the blue water spots.

May / June
The seas are very calm, the water does start to cool down so the numbers of pelagic fish does reduce. However the fish are generally bigger and it’s a good time for trophy hunting. The big Spanish Mackerel move to the shallow reefs and Bigger Wahoo can be found on the Marlin spots. This is generally the time of the year when the guys catch the biggest Marlin. 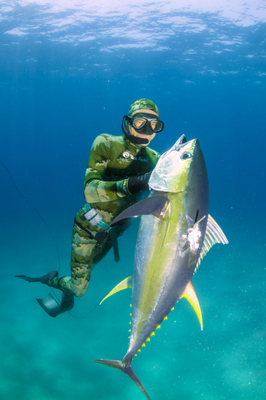 July / August
The water is usually greener as the water temp drops and the winter southerly winds blow strong every few days. There are not too many pelagics around. But this is Mozambique and anything can happen. Things do start coming right towards the end of August.

September
Although this is late winter the fisherman get their best fishing in the deep. With good catches of all pelagic gamefish, including big Black Marlin. The northern reefs produce some of the biggest wahoo and Yellowfin Tuna around this time of the year.

October
This is normally the windiest month, and the transaction of the seasons, so weather can be variable. The fishing however can be great, but allow for some weather days in between dive days.

November and December
Weather turns early in November and the sea starts to warm up bringing with it an abundance of gamefish. The weather is generally good and the visibility can be an excellent 20-40m. This is the start of summer and you will be spoilt for choice.

December is a peak holiday season so advanced booking essential. Accommodation costing will be more expensive. 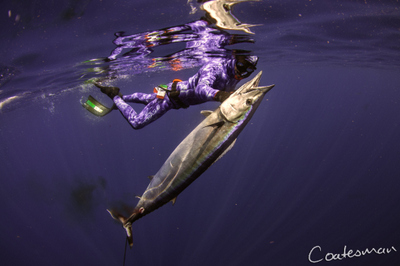 November and March – April are the prime Marlin seasons when the large shoals of small tuna congregate on the deep water banks attracting all sorts of large game fish.

January and February are the warmest months and prime game fish times of the year. However Wahoo and Sailfish seem to like March through into winter.

April through to June have the best weather and although maybe the game fish are not as prolific, the shear time in the water compensates for this and you get just as many fish. Winter (May-end September) is the dry season and the water on the shallow northern reefs get very clean. This gives you so many options on any given day. 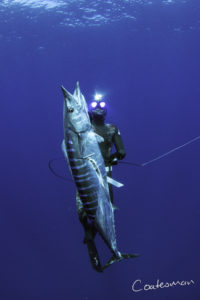 The late Winter game fish returning from the sardine shoals down south are big and fat. This in itself makes the winter run special.

The biggest factor affecting the fishing is however the tides. Strong spring tides cause strong currents and are good for gamefish. While the currents are slower on the neap tides making reef hunting easier.
For this reason most trips are scheduled over 10 – 7 days to ensure that you get the best of both worlds.

Southern Mozambique has deep blue water where you will be diving in 40-60m of ink blue water. The Deep reefs for pelagics range from 20-30m and the northern reefs for reef species range from 16-25m.  Sometimes you will dive these spots and more all in one day.

NB – Reef species are not allowed to be taken around Inhaca Island and southward towards Ponta Do Ouro as the area is now in a marine protected area.
Fishing permits are required and the boats used are through a licensed operator. The sale of any fish is also not permitted in Mozambique. 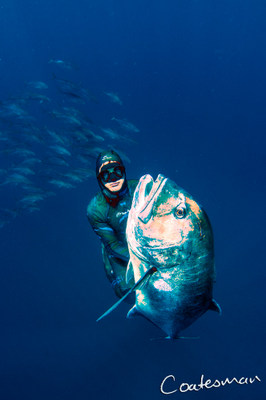 The spearguns you will need here is going to be 1200 – 1300 rollerguns anything shorter and you will be doing a lot of ‘tag and release’. Even when the vis down you might encounter very big fish and need the penetration power. I suggest at least 2 meters of soft bungee cord attached to a 30m buoy line with one or two solid foam floats +/- 10liters.
NB – Thick heavy bungees are useless here, opt for thinner and stretchy ones. You will land heaps more fish.

Reelguns are fine but only for the experienced spearfisherman, who have used a reelgun on large pelagic fish before. The problem is that big fish like Marlin are often encountered and land this fish on a reelgun is difficult. (Beltreels are none negotiable here, firstly for safety reasons, secondly to asist with landing big fish) 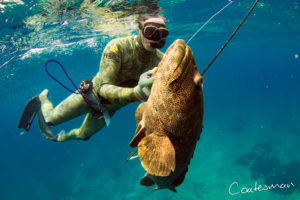 If you are specifically looking for Marlin big blue water guns can be used, however they may be too cumbersome for most other game fish. There are good rollergun setups that are probably better.

Very Important:
Please insure that your equipment is in good working order, and that all guns have been tested. Preferably in a pool to ensure accuracy and effectiveness. You do not want to come halfway around the world and miss on a fish of a lifetime because of faulty gear. If you need help I will assist wherever I can. I can also supplying gear for your trip, so you dont have to fly in with heavy shafts ect. 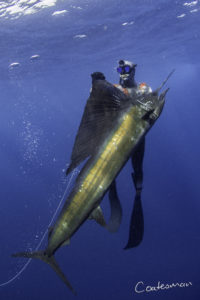 These prices include:
Luxury accommodation and meals. Comfortable 30ft dive boat. Transfers to and from from Maputo via boat. All guiding fees and costs, including professional underwater photographs.

These prices include:
Good accommodation with air con and meals. Comfortable 20ft dive boat. Transfers to and from from Maputo via boat. All guiding fees and costs, including professional underwater photographs.

All prices might fluctuate according to exchange rates and fuel costs at the time.
Please Read Terms and Conditions